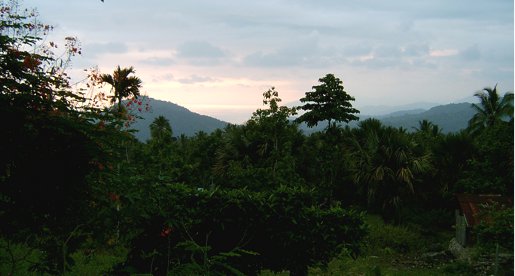 The area designated here as the Eastern Tip of East Timor politically includes parts of three districts: the Lautém district, the Baucau district and the Viqueque district. A comparatively large region, its landscape is varied, and three different settings will be focused on.

The first of these is Iliomar, a subdistrict of the Lautém district. The area is very mountainous, with elevations ranging from sea level to almost 900 m. The subdistrict borders the sea south of Timor, which tends to be rough; hence most of the population is found some way inland. The subdistrict is heavily forested, being covered with tropical dry and moist deciduous forest, although agricultural land is scattered throughout the region. The majority of its inhabitants are subsistence farmers.

The language spoken around Iliomar is Makalero, one of the westernmost Papuan languages. It has approximately 7,000 speakers.

The second setting is centred around the town of Baucau, the second largest urban centre in East Timor. The town is situated at the island’s north coast, on a ledge characterized by striking rock formations, and there is a steep drop towards the beach. The sea here is much gentler, hence next to small scale farming, fishing is an important part of subsistence.

Makasae, the Papuan language spoken in Baucau, is one of the major languages of East Timor, with some 90,000 speakers. It is very closely related to Makalero.

Finally, the last setting is centred around Lospalos, the capital of the Lautém district, set on an inland plateau at an elevation of approximately 340 m. It is surrounded by agricultural land and grassland. Not far from Lospalos is Lake Iralalaro, a freshwater lake which reaches a considerable expanse during the rainy season, but shrinks during the dry season. Thanks to its presence, fish is a part of the diet in Lospalos, together with other local produce.

The language spoken around Lospalos is Fataluku, a Papuan language related somewhat more distantly to Makalero and Makasae.